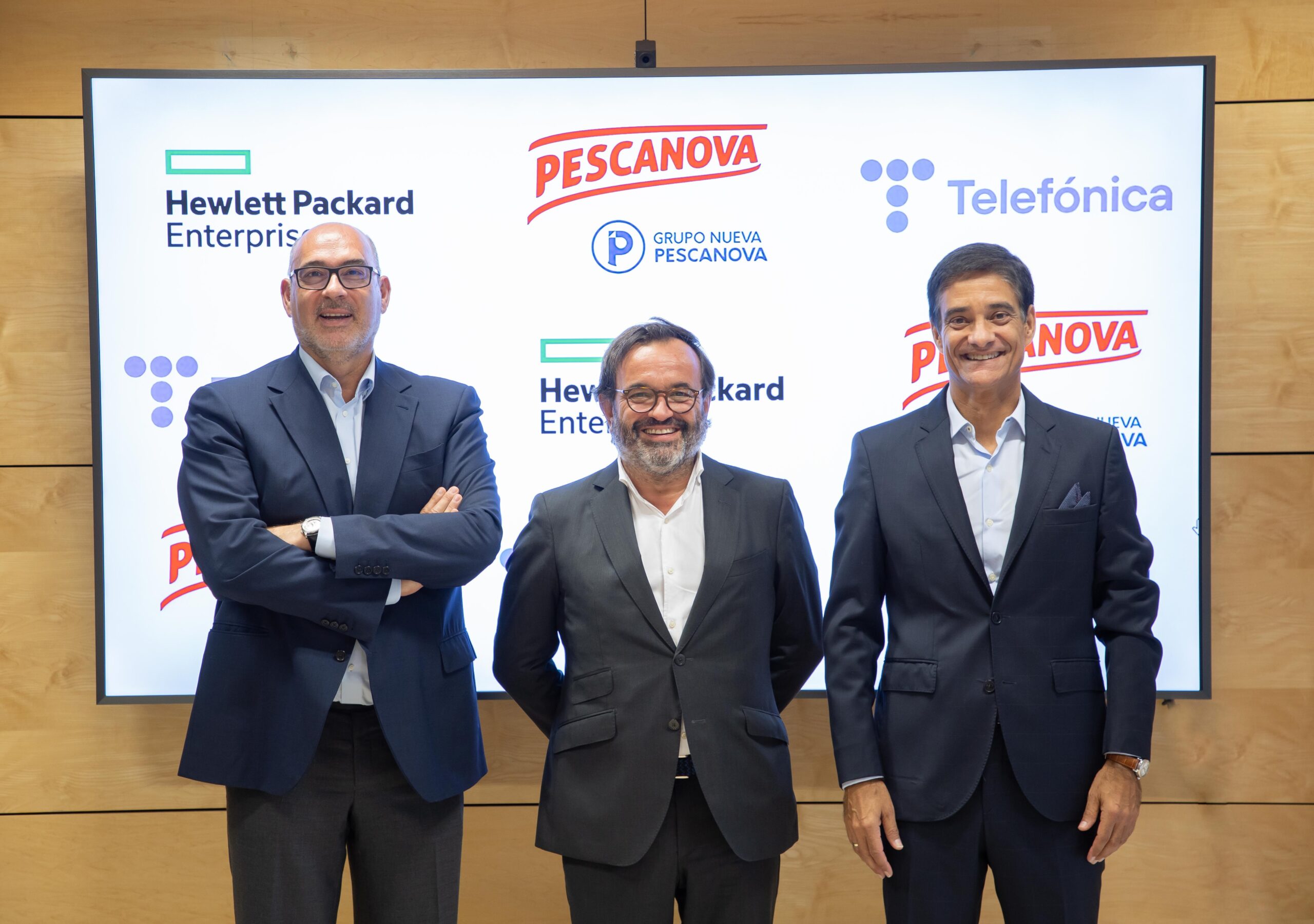 ●This agreement includes the centralization of the Nueva Pescanova Group’s information and the standardization of its technological platforms across the different countries in which it operates
● Telefónica España and HPE will also manage the Group’s entire data and fixed communications network around the world
● The partnership agreement was ratified at a meeting between the CEO of the Nueva Pescanova Group, Ignacio González, the president of Telefónica España, Emilio Gayo, and the president of HPE in Southern Europe, José María de la Torre

The Nueva Pescanova Group, Telefónica España and Hewlett Packard Enterprise (NYSE: HPE) will work together to further the digital transformation process of the Spanish multinational company dedicated to the fishing, farming, processing and marketing of seafood products.
More specifically, this agreement includes the centralization of the Nueva Pescanova Group’s information and the standardization of its technological platforms across the different countries in which it operates. In this way, the company will have a shared environment that will improve the security, control and management of its information and will therefore gain in terms of efficiency and productivity.
This partnership agreement has opted for a co-location model that will improve the performance of the Nueva Pescanova Group’s digital infrastructures and will be key to the interconnection of all of the multinational’s headquarters. Telefónica España will be responsible for the design of this system and will house the multinational’s data processing center at its facilities in Madrid. It will also manage the project’s connectivity and security solutions. This will allow the Group’s IT teams to focus their work on high value-added tasks while having a positive impact on environmental sustainability.
HPE based its technological proposal on HPE GreenLake. By using a single cloud platform and a hybrid model, HPE GreenLake will enable the Nueva Pescanova Group’s IT department to increase its productivity in a safe, resilient and more energy-efficient way. The technology consumption model proposed by HPE helps to promote sustainability of technology, by eliminating over-provisioning, enabling the adaptation of technological infrastructures according to needs, and enabling the recovery of assets at the end of their use.
Telefónica España and HPE will co-develop new solutions for security, cloud integration and improving the usability of the Group’s ERP, and will manage the multinational’s entire data and fixed communications network. This will lead to the homogenization and standardization of the company’s headquarters around the world, while taking into account the specific features and peculiarities of each country.
This agreement was ratified at a meeting held at Telefónica’s headquarters in Madrid between the CEO of the Nueva Pescanova Group, Ignacio González, the president of Telefónica Spain, Emilio Gayo, and the president of HPE in Southern Europe, José María de la Torre.

Ignacio González stated that “at the Nueva Pescanova Group we are immersed in an ambitious process of digital transformation and the partnership with HPE and Telefónica España is key to achieving our objectives in this regard. The standardization of our technological platforms and information throughout the world not only entails advantages in terms of security, access and efficiency, but also a better information management. This will allow us to be more agile in our decision making”.
In the words of Emilio Gayo, “at Telefónica España we are very happy to be involved in the project to transform Nueva Pescanova’s digital infrastructure and to be doing so in collaboration with a leading multinational such as HPE. The work that we are going to perform at the Nueva Pescanova Group, related to connectivity and digital services, is part of the broad portfolio of high value-added solutions that has made us a benchmark partner in this area for companies, both in Spain and abroad”.
José María de la Torre added that “to meet the challenge faced by the Nueva Pescanova Group, we proposed an as-a-service model based on our market-leading proposal, HPE GreenLake, which will provide the company with a hybrid model where all workloads have the same consumption experience, regardless of their location. In this way, we will help the company achieve greater flexibility and agility in delivering corporate services globally, as well as improved availability and security and greater alignment with its environmental and sustainability goals”.